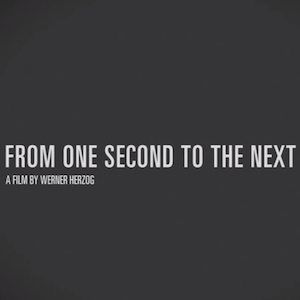 From One Second to the Next by Werner Herzog

The moment I read about this new documentary short from Werner Herzog, I thought, “A public service announcement video to warn people to never text while driving? Really?” It seems like a small hair ball of a problem that should already be common sense. Having watched the short, I realized that’s precisely the problem, that texting while driving seems like a such a minor hiccup. It is not.

The half-hour short covers the story of four accidents that have caused by texting while driving. One case has a child that is paralyzed for life and is currently on life support, caused by an accident from a teenage girl who was distracted from texting. There were no skid marks. She never saw him. Another case involves a man who killed two Amish children. The driver is now perpetually left to questioning himself what was so important about his text that couldn’t wait. The other two cases was a family dealing with the monstrous medical bills from her mother’s accident and a family losing her father. What really struck me was the last man who caused the accident, who wasn’t able to recall the text message he sent after the accident happened. He couldn’t remember why it was important.

Herzog brings his brand of deep introspectiveness to the short, adding the much-needed seriousness this topic deserves. As the title suggests, life is connected by each second. It’s in-between each seconds we must throw caution, because everything can change within a second. The most disturbing part for me was, my initial reaction was exactly the type of behavior this short was trying to warn against. It is not a hairball. It is not something to handle. Reading a text is not better than sending a text. There are human lives at stake. Do not text and drive. You just do not do it.

Some statistics I found on texting while driving:

The documentary can be viewed here. The slogan to the AT&T campaign is “It can wait.”

Into the Abyss by Werner Herzog