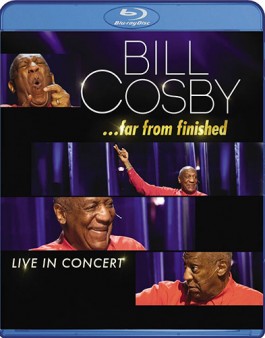 Bill Cosby has been an artist who has always been around who I never took the time to familiarize. Growing up, he was always the Jello guy and then later the host of the hilarious Kids Say The Darndest Things. A few Youtube clips aside, I have not seen any of his standup specials in completion.

The simplicity and universalness of Cosby’s comedic material is the price of admission. Most of the act is themed towards dissecting love and marriage. The highlights for me were his opening bit about people’s expectations of him swearing on Comedy Central, a bit about chess, and another where Cosby uses audience interaction to build a surprise twist.

Cosby’s drawled out diction makes it hard to focus on what he’s saying. I zoned out a few times because he took so much time between words. Maybe this is a case of me not being previously familiar with his past stand up specials, but there was much rewinding on my part. It is ultimately something one just tunes to or doesn’t.

Cosby’s persona and ability to act out his concepts makes up for it. His facial expressions are world creation; they instantly transport the viewer and place them where he wants to them to see the absurdity of his jokes. His persona is likened to an senile man trying to prove that his mind is still working. Don’t be fooled, he’s still very sharp. There’s one noteworthy hilarious moment where he barks at the audience for finishing one of his punchlines. It still boggles my mind how he can rouse that much energy on stage sitting down.

Anybody who wants a laugh for an hour, I recommend it. Anybody can enjoy it. 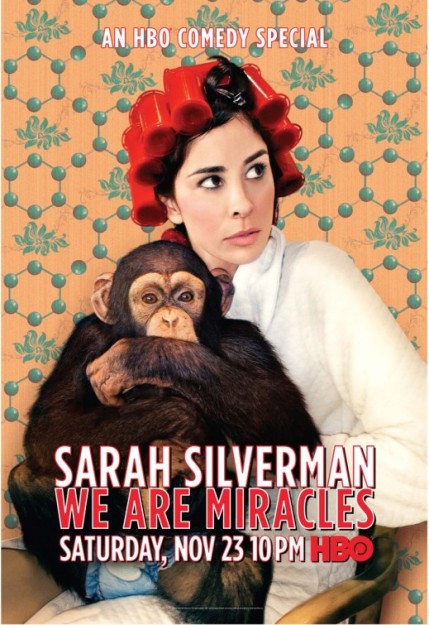 Sarah Silverman: We Are Miracles

Sarah Silverman is a comedian that’s always been around, but an artist I never directly got into by chance. I watched a few episodes of The Sarah Silverman Program, which was too obscure for my taste. But I always enjoyed her cameo in Judd Apatow’s Funny People, Louie and thought she gave an effective supporting performance in Sarah Polley’s Take This Waltz. I enjoyed clips of her standup online, but have not seen her perform a complete comedy hour till now.

The decision to shoot the special at the Largo Comedy Club in front of 39 people is a great one. Silverman never looks far off into the distance or above to a balcony booth. There’s no big giant TV screen of her in the background for the cheap seats. The intimacy of the Largo lends itself for Silverman’s raunchy off-the-wall random tangent comedy, giving her much more freedom to roam from topic to topic without transitions.  “I don’t need segue ways.” Silverman quips,
“The brain doesn’t work that way.”

Some of the joke highlights were a childhood story of how her older sister used to scare her, sin atonement in Christianity and a bit about the Make A Wish foundation. It’s nice how much politically incorrect jokes she gets away with, showing an affable innocent girly  persona can really go a long way to make hard topics durable.

The whole experience is more akin to a live show, as Silverman is able to milk laughs from silences and even counter critique audience reactions when they aren’t up to par. It’s always awkward when comedians do audience interaction in big theater shows and this completely fixes that. The reactions from the 39 people create a more potent, immersive connection to Silverman’s perspective. And making 39 people laugh, after all, is much harder than making 200 people laugh. 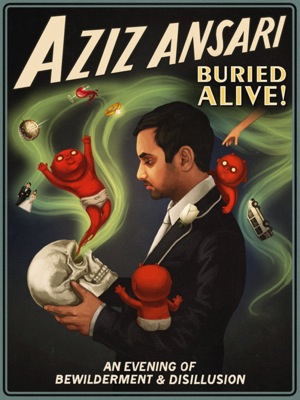 The core aspect to Aziz Ansari’s standup, from his previous specials Dangerously Delicious and Intimate Moments for a Sensual Evening, is his ability to create random tangents. Here is the structure: 1) Aziz encounters something absurd or silly. 2) He deconstructs it with logic. 3) He then expands the absurd concept on imaginary random tangents. For his last special, this got repetitive and I distinctly remember zoning out until he changed it up. They’re funny anecdotes, but the core message under his bits don’t hold water because we know these imaginary tangents he exits his jokes on never happened. More importantly, they never could happen.

He has improved upon this for Buried Alive, no longer relying on anecdotes of meeting strange people or talking about his oddball cousin Harris or Kayne West stories. Instead he focuses his logic and ability to create imaginary scenarios onto real life. In Buried Alive, it’s mostly centered upon the subjects of dating, marriage and raising a family. The difference is, he has a point of view and uses his humor to highlight his fears and trepidations about marriage, the massive responsibilities of marriage and raising a child and how strange dating has become in the day of modern technology.

My two favorite segments where Aziz does crowd work, a considerably risky move for a comedian taping a comedy special. He interviews a couple on how they got engaged and another woman about receiving obscene penis photos from men. It’s in these segments where he displays his immediate comedic reflexes, quickly spinning jokes out of people’s answers. He probably has performed this a thousand times touring the country with this hour, but it still had a raw quality to it that brought genuine surprises. These were the highlights of the special.

There’s one portion where Aziz boasts how many white women he beds to argue how pointless it is for people being against interracial dating. I agree with his point. I don’t even like the word ‘interracial’ as a concept. But the fact that he put himself above the audience for a laugh seemed off color for a moment.

Part of the fun of following an artist is watching them grow. For that reason, fans that have watched Aziz’s two previous specials will probably enjoy this one more. This is Aziz Ansari’s best comedy hour thus far and he knows it. He has found meaningful things to say and more clever ways to deliver them.